It was confirmed today that Alderney Week will take place from Monday 2nd to Saturday 7th August 2021.

Organised again by the same Alderney Week team as last year – Ronnie Cairnduff with the help of his team mates Lee Flewitt, Ilona Soane-Sands, Sam Gaudion, Nigel Vooght and Donald Hughes – the theme for this year’s event is

“ALDERNEY ADVENTURES – THE SHOW MUST GO ON!”

“The emphasis will be on fun, adventure and joie de vivre – everything we have been looking for since the lockdown.” said Alderney Week Team leader Ronnie Cairnduff. “And this year’s theme will provide plenty of scope for floats and costumes. As we all know: life on Alderney is full of adventures – past, present and future.”

Over the next month the Alderney Week team will be working on the programme of events which will kick off on Monday 2 August with Cavalcade Day and the lively and colourful Cavalcade Parade. 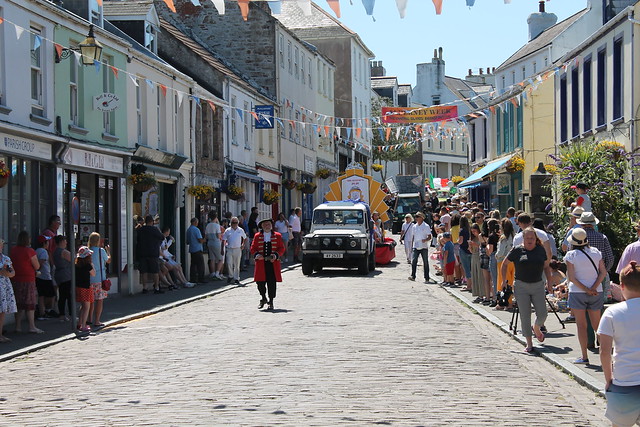 In addition to many of the traditional popular favourites – such as the Daft Raft Race, Strongman and Strongwoman contests, a Mini Gala Night, the Harbour Festival and the ultimate torchlight procession and amazing fireworks, the
programme is expected to feature several new events and local and visiting musicians and bands will be providing great live music.

And, if anybody would like to suggest any new feasible events, please email info@alderneyweek.com with your ideas.

Alderney Week will again be preceded by the popular fundraising “Rock-the-Rock” Music Festival on Saturday 31 July, organised by the Alderney Rock Trust and it is hoped that a Victoria Street Market can be organised for Sunday 1 August.

The Alderney Week Team will be working closely with the island’s main event organisers: The Alderney Wildlife Trust, VisitAlderney, The Alderney Bird Observatory, the football club, the rugby Club, the RNLI, the sailing club, the Alderney Railway Society, the Alderney Theatre Group , Rotary and other individual organisers, inviting them to host or help organise events.

More details of the programme of events will be announced regularly and updates will be published on our website www.alderneyweek.net and on the Alderney Week Facebook page.